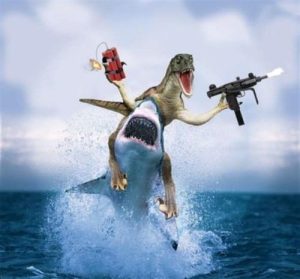 a recounting and review in couplets
by D. R. Goodman

Our heroes (boys, of course) embark
to visit auntie at the park.
But auntie’s busy pandering
to corporate moguls wondering
what awesome monster BD Wong
might soon unveil before the throng
of highly-paying visitors
who’ve come to see the dinosaurs –
and so she sends a snippy Brit,
cell-phone obsessed, to babysit.

Behind the scenes, a guy named Owen
gets Velociraptors goin’,
training them to hunt and play,
and then (if we’re all lucky) stay,
get back, refrain from eating him
and other staff, which would be grim.
But evil Vince D’Onofrio
butts in with plans to let them go
afield as soldiers (raptors?! yes!),
assisting in tough spots, I guess,
like Syria, Afghanistan
(“if only…Tora Bora… man!”),
obeying orders from the troops—
unless they don’t (in which case, oops).

And then that actor, sad of eye,
from Lunchbox shows up as the guy
who owns the place. We can’t decide:
Is he a mensch, just selling rides?
Or bad guy, greedy to extremes?
A little bit of both, it seems.
He authorized BD to work
on creatures bound to go berserk
(spoiler alert!), but now feels doubt,
(what if Indominus rex gets out?),
tells auntie to call Owen in
(romantic interest!) to begin
assessing safety—and, guess what?
Containment’s weak! And so the plot
from twenty years ago replays
in much more bloody, violent ways,
with much less thought and much less depth.
Poor Michael Crichton would have wepth.

The boys go AWOL on a ride
without their nanny at their side—
and into mortal danger, yes.
How will they get out of this mess?
Then for a grueling hour, you’ll see
Indominus rex’s killing spree,
destroying staffers, soldiers, more,
with unmatched cruelty and gore,
and decimating harmless hordes
of sweet Jurassic herbivores—
the gore no easier to take
because the animals are fake.
A copter crashes, “birds” get out;
now Pterodactyls swarm about
with beaks like swords, and snatch as prey
the tourists as they run away.

Both good and bad die needlessly,
no line, no plot, no sympathy,
till finally Owen and his girl
set out to save Jurassic World
with guns and raptors to assist,
to hunt I. rex —wait! there’s a twist!
It’s not as simple as we thought!
Has all this training been for naught?
When all seems lost, our genius-boy
invokes T. rex—and hence this ploy:
our heroine, in heels, with flair,
brings old Tyrannosaur to bear;
and in a loud, horrendous fight
genetic cousins rend the night,
disturbing Sea World’s Mosasaurus.
Who will win the battle for us?

I won’t give it all away,
just this much more: Suffice to say
that Vincent D. is made to pay,
while BD lives another day
with I. rex eggs safely in tow
to guarantee a sequel. (No!)
The babysitter meets an end
so harsh and pointless, it offends;
and if you think she gets her due
gratuitously—so do you,
for paying bucks to see this dreck.
The movie is a bloody wreck.
But since we’ve made it here, this far—
let’s learn the morals. Here they are:
Folks, do not get divorced—it’s bad:
you’ll make your little genius sad.
Don’t joyride in a gyrosphere.
Don’t pass the sign that says “Stop here.”
Megalomania’s not good.
Respecting living things? You should.
And, scientists, amoral jerks,
(yes, all of you!) just stop your work!
Or, at the very least, god knows:
Don’t weaponize your GMOs.

There! Now I’ve saved you the trouble of going to see it. You’re welcome.
BTW that awesome pic of a dinosaur riding a shark is from dailydawdle.com.

6 thoughts on “Ballad of Jurassic World”

Thank you for visiting. All poems, unless otherwise credited, are copyright D. R. Goodman, all rights reserved. If you have any questions, or you wish to reproduce a poem with permission, please fire off an email to me. I would love to hear from you.
drg[at]drgoodmanpoetry.com